Michael S. Evans J.D., M.S.W., is a social worker and practicing attorney with twenty years of experience helping patients plan and implement their end-of-life wishes. He taught at San Diego State University and University of San Diego before co-founding the Center for Professional and Ethics and Law. As legal advisor to several right-to-choose-to-die organizations, he authored a model Advance Health Care Directive to broaden the choices of California’s residents.

Robert Gibson, JD, PhD, has worked as a psychologist for the past four years in long-term care and has extensive experience with the issues of patient rights and care for persons with diminished mental capacity. In addition to being a licensed psychologist, he is admitted to the California Bar as an attorney. His practice includes conducting decision-making capacity assessments to facilitate advance care planning. He has written policies for a county hospital facility regarding advance directives, surrogate decision-making, informed consent, and conservatorship. He speaks at local, state and national conferences on issues related to decision-making capacity, including how this applies to Advance Care Planning.

Thaddeus Mason Pope is Associate Professor and a member of the Health Law Institute at Widener University School of Law in Delaware. Previously, he taught at the University of Memphis School of Law, and worked for Arnold & Porter LLP (in Los Angeles and Washington, DC), and clerked for the U.S. Court of Appeals for the Seventh Circuit (in Milwaukee). He earned his J.D. and Ph.D. (in philosophy) from Georgetown University. His current interests are: Death and dying issues, particularly advance directives and medical futility; Health care ethics committees as internal dispute resolution mechanisms; Tort law issues, particularly the assumption of risk doctrine; Public health law issues, particularly the legitimacy of restricting voluntary self-regarding conduct for the sake of the common good; and, Normative jurisprudence issues, particularly the justifiability of hard paternalism. He is widely asked to present on the issue of Medical Futility; for example, before the President’s Council on Bioethics in 2008.

Karl Steinberg, MD, is a geriatric physician certified in Family Medicine, in Hospice and Palliative Medicine, and by the American Medical Directors Association. He is the Associate Medical Director for Scripps Coastal Medical Center. He attends patients at about fifteen nursing homes and multiple assisted living and other residential care facilities within North County, and is the Medical Director at Las Villas de Carlsbad Health Center, a Skilled Nursing Facility and Continuing Care Retirement Community in Carlsbad. Dr. Steinberg is active in the American Medical Directors Association and will be the next Editor-in-Chief of their journal, Caring for the Ages. He is the president of the California Association of Long Term Care Medicine, and is a member of the task force responsible for creating the California POLST form. 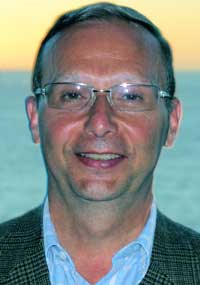 Michael Ellenbogen first symptoms of Young-Onset Alzheimer’s Disease began when he was 39. Back then, he was the “go-to” guy as a network operations manager at a Fortune 500 financial institution. His difficulty with work-related tasks forced him to take early retirement. Unfortunately this was years before he received the correct diagnosis.

He is now a world-renowned advocate for Alzheimer’s and related dementias. He was featured on nationally syndicated radio and TV. He has written numerous blogs, articles for newspapers and websites, and shared his personal perspective as a guest speaker for dozens of organizations.

Michael served on several advisory councils such as Pennsylvania Alzheimer’s Disease Planning Committee. He speaks regularly to the Advisory Council on Alzheimer's Research, Care and Services for the National Alzheimer’s Project Act. He published his personal story as a featured article in the 2012 World Report of Alzheimer's Disease International.

Michael is passionate about many causes related to dementia. He wants to motivate those with Alzheimer’s to raise their voices to reduce the stigma surrounding their disease. He lives this goal by example: The diagnosis of Alzheimer’s diagnosis was not the end for him; but it did change his direction so that now he feels he has much more to give to the world. Another example: He wants to work on a solution to avoid prolonged dying in the advanced stage of dementia. Then, early stage dementia patients will not consider premature dying. Michael wrote about his current journey with the disease of dementia in his second book, “From the Corner Office to Alzheimer’s.”

Back to About US Page