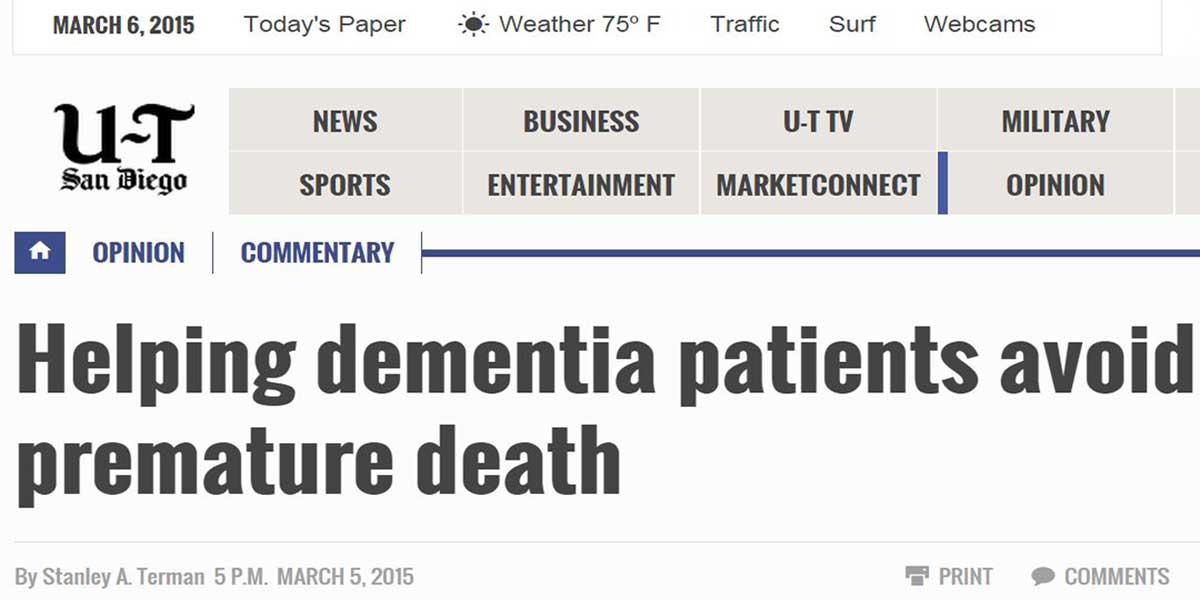 “How long do I have?” is question No. 1 after receiving a terminal diagnosis. If diagnosed with dementia, often the next is, “How can I avoid prolonged dying in Advanced Dementia?”

Some early stage dementia patients actively commit suicide; others passively hasten their dying. Premature dying is sad since living can be reasonably good through middle-stage dementia. Hastening dying is unnecessary since patients have another choice. Deciding to die prematurely — if based on inadequate knowledge — tragically violates the preciousness (or sanctity) of life.

Legalizing physician-assisted dying cannot help advanced dementia patients since they are not competent and usually live longer than six months. Many have “No plug to pull.” Science writer Robin Henig wrote, “Choosing an end game is all but impossible if you’re headed toward dementia and you wait too long.” Not knowing how others can allow them to die, many early stage dementia patients harbor the realistic “dementia fear.” Their lament is, “If I don’t die now when I still can, then I won’t be able to die later, when I would prefer.”

The existing discrepancy between fear and knowledge may worsen as people discuss “Still Alice.” The movie dramatized the problem but offered no solution.

“Alice” wanted to live as long as possible. Why was her plan for timely dying flawed?

Regarding when to die: Alice misplaced her cellphone that stored key questions intended to test her memory. Progressive dementia would likely have destroyed her ability to use her phone anyway. Her selected questions might lead to premature dying. Many dementia patients cannot recall dates, addresses or names — but can still enjoy companionship of loved ones and simple pleasures of life.

Regarding how to die: Alice asked her doctor to prescribe Rohypnol — a “powerful” sleeper. Her doctor responded, “That’s very strong.” Not authentic: First, this drug is illegal to prescribe in the U.S. Second, overdoses of benzodiazepines used alone are rarely lethal. Physicians can no longer prescribe barbiturates for insomnia after thousands died, including Jimi Hendrix and Marilyn Monroe.

Regarding executing the plan: Alice finally found the hidden pills, but dropped them on the bathroom floor. The message is clear — early dementia patients cannot feel confident their “future demented self” will be capable of carrying out their plan.

How can people like Alice avoid prolonged dying in advanced dementia?
1) Complete a clear and specific living will that expresses judgments for specific conditions to indicate when they want to stop all interventions that merely prolong dying.
2) Record a convincing video of themselves explaining why they refuse assistance with hand-feeding and drinking to overcome the “no plug to pull” challenge.
3) Designate a trusted person as their proxy/agent to make sure others honor their wishes.

Refusing all food and fluid allows a peaceful dying, usually within 14 days, which observing hospice nurses rated more peaceful than physician-assisted dying. Dying by medical dehydration is legal, ethical and moral. Religious authorities may consider it consistent with their teachings.

Legal: Common and constitutional law grant competent adults the right to forgo — in advance — unwanted intrusions of their bodily integrity, including “force-feeding.” Those responsible must still offer food and fluid by placing these vital substances in front of patients. Otherwise, they could be charged with homicidal negligence or euthanasia. The two-part request, “Withdraw hand-feeding/drinking, but do not withhold food and fluid,” can be referred to as “natural dying.”

Ethical: At some point in the progressive disease, dementia, the harm and burdens of hand-feeding/drinking will outweigh its possible benefits.

Moral: Enlightening education can justify feeling it is right — not cruel — to allow Advanced Dementia patients to die to avoid prolonging suffering that may include unrecognized, untreated pain. For slowly dying patients, it is wrong to equate food with love, or feeding with loving.

Consistent with religious teachings: Religious authorities may apply the principle of proportionality included in many living wills to judge patients’ intent not to end life, but to discontinue treatment. They may judge the cause of death as the underlying disease — dementia destroyed brain functions required to put food and fluid in the mouth.

To preserve life, inform all engaged in advance care planning — especially those harboring the “dementia fear” — they can avoid prolonged dying in Advanced Dementia. Encourage them to plan now to live longer. This positive approach may motivate more people to complete effective living wills. It may even eliminate their fear of “death panels.”

Terman, Ph.D., M.D., is a psychiatrist and bioethicist who leads the nonprofit organization Caring Advocates. He authored “Peaceful Transitions: Stories of Success and Compassion” and “Natural Dying — Living Will Cards.”